For the second consecutive year, TUTI Books has been shortlisted for the 2021 Bologna Prize “Best Publishers of the Year”.

TUTI Books, based in Tehran, Iran, has been shortlisted for the “Best Publishers Award” by Bologna Children’s Book Fair for another year in a row and will be competing in Asia alongside publishers from China, Japan, and South Korea for the best publisher of the continent.

The nominees for this list are selected by credible institutions and publishers taking part in the Bologna Book Fair. We are happy to see that TUTI’s efforts and activities have gained international recognition. We hope that TUTI Books, as the only selected publisher from the Middle East, would be a suitable nominee from Asia to represent Iran’s rich children and young adults’ literature.

Every year, the winners are announced on the opening ceremony of the Bologna Book Fair and prominent titles of the selected publishers are introduced through the fair’s catalog, newspapers, and social media. Same as the last year, the voting process to select the best publishers will be held online and the results will be announced during the 4-day period of the Book Fair which will be 14-17 June.

The BOP -“Bologna Prize for the Best Children’s Publishers of the Year”- was first established in the 50th anniversary of the Bologna Book Fair in 2013.  It is an extraordinary occasion to highlight publishers at the forefront of innovation in their activity for the creative nature of the editorial choices they have made during the previous year.

The prize, organized by the Bologna Children’s Book Fair and AIE – Italian Publishers Association in partnership with IPA – International Publishers Association, awards those publishers who have most distinguished themselves for their professional and intellectual skills in each of the six areas of the world: Africa, Central and South America, North America, Asia, Europe, and Oceania. 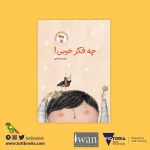 "What a Brilliant Idea!" Selected by the Victoria State Government for State Schools And LibrariesMay 16, 2021
TUTI Books is the Winner of BOP 2021 –Bologna Prize Best Children's Publisher of the YearJune 15, 2021 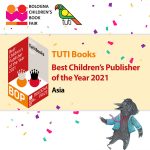